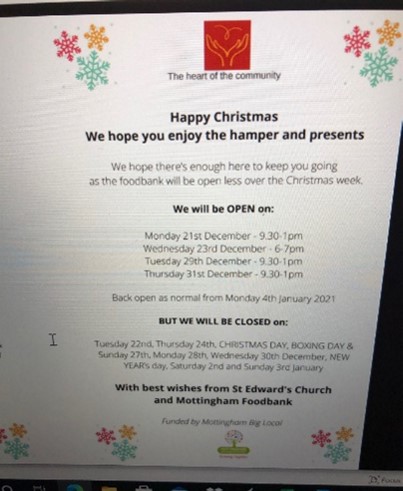 This project provided Christmas parcels to 95 vulnerable families with children within the MBLR area. The parcels included food and gifts for the children.

The large range of items and presents were gathered over the period from mid-November to 18th December. The parcels were all packed by teams of volunteers on Saturday 19th December and delivered from 19th to 22nd December.

Over thirty volunteers helped to sort and pack the Christmas parcels under strict Covid-19 conditions such as social distancing.

Our MBLR Support Funding of £975 went further because gifts were donated rather than having to be purchased.

St . Edward’s has received great feedback from people who received the parcels.